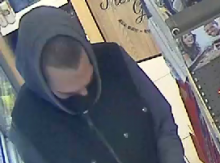 A CCTV image of a man has been issued by officers investigating a series of reported shopliftings in Sittingbourne.

Several incidents have taken place at the Shell garage on London Road since Sunday 4th October, in which alcohol has been stolen and members of staff threatened.

Kent Police collision investigators are appealing for information following the death of a pedestrian in Sittingbourne.

The victim, a 16-year-old girl, died on Wednesday (4th November) following the collision which happened last Sunday 1st November on the A2 Canterbury Road at the junction with Murston Road.

The teenager was crossing Canterbury Road from the direction of Rectory Road when she was involved in a collision with a silver Vauxhall Zafira at around 6.25pm in the evening.

The victim was taken to a London hospital with serious injuries where she later died.

Kent Police have confirmed that increased police patrols will be taking place in public spaces and on beaches over the coming days to help remind people about social distancing advice, deter illegal mass gatherings and deal with any associated crime and disorder.

Forecasts for the weekend predict some wet weather for the county but Kent Police will be having an increased presence to make sure those who do venture out do so responsibly.