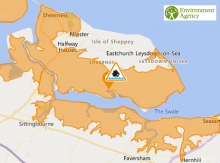 A Flood Alert has been issued due to the high tide forecast for this afternoon (Sunday 10th May).

The Environment Agency has confirmed that the highest tide level is expected to be at 3:30pm this afternoon. Flooding is possible two hours either side of this time.

They say they are monitoring the situation, though flooding to properties is not expected. The main areas of concern include Faversham and Conyer and response staff are checking flood defences and structures and are prepared to respond if required.

Each used speed guns to record a vehicle's speed and provided words of advice to drivers who had been stopped due to their speeding.

The roads checked were Woodstock Road in Sittingbourne, Chestnut Street in Danaway and both Scocles Road and Minster Roads, in Minster-On-Sea.

Kent Fire And Rescue Service (KFRS) crews have been dealing with a fire in a field of around 1000 square metres of standing and cut corn, near Warden Bay Road in Leysdown.

The call was received shortly before 11am this morning (Friday 27th July) and firefighters have been tackling the fire using breathing apparatus.

Four fire engines were initially in attendance at the incident, though has now been reduced to two engines.

Crews have been working with the landowner to create fire breaks to prevent further fire spread.

In a Facebook post commenting about the death of 100-year old widow Zofija Kaczan, who relocated to Britain from Poland after the Second World War and was cruelly mugged whilst walking to church in Derby recently, Mr Henderson's page asked for the re-establishment of capital punishment.

Officers from Kent Police have arrested a man from the Croydon area after he visited a prison on the Isle Of Sheppey.

The 26-year-old man was arrested on suspicion of trying to take prohibited items into HMP Standford Hill after he was seen acting suspiciously near the prison.

Officers arrested the man at around 7.30pm on Sunday (11th February) and found a pillowcase hidden nearby. Inside the pillowcase were items including a mobile phone, charger, alcohol, razor blades, tobacco and 50 tablets which were believed to be Oxymethelone. 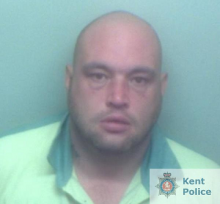