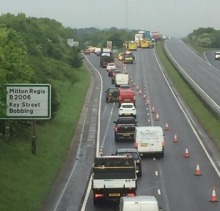 Kent Police officers are appealing for witnesses following two separate collisions on the A249 earlier today (Thursday 19th May).

The first collision occurred at 4.01am this morning on the Maidstone-bound carriageway next to the Key Street roundabout and involved a Renault Modus car and a HGV lorry.

At 5.01am a second collision was reported a short distance away on the same carriageway. The incident was close to the junction for Bobbing and was reported to have involved a Citroen Berlingo van and a lorry which was queuing as a result of the initial collision.