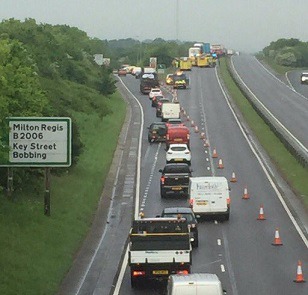 Kent Police officers are appealing for witnesses following two separate collisions on the A249 earlier today (Thursday 19th May).

The first collision occurred at 4.01am this morning on the Maidstone-bound carriageway next to the Key Street roundabout and involved a Renault Modus car and a HGV lorry.

At 5.01am a second collision was reported a short distance away on the same carriageway. The incident was close to the junction for Bobbing and was reported to have involved a Citroen Berlingo van and a lorry which was queuing as a result of the initial collision.

Two men, one from each collision, were taken to hospital with serious injuries.

Witnesses are asked to call the Serious Collision Investigation Unit at Maidstone Headquarters on 01622 798538.