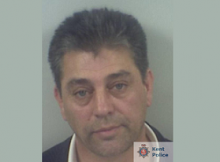 A rogue trader has been sent to prison after tricking a man into spending more than £100,000 on unnecessary repairs to his house.