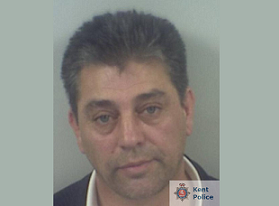 A rogue trader has been sent to prison after tricking a man into spending more than £100,000 on unnecessary repairs to his house.

The retired Teynham resident first encountered Abey Smith (pictured above) in April 2016 when he received a card offering home improvements through his letterbox, leading to him agreeing to pay £45 for his guttering to be cleaned. But over the course of the next year he repeatedly lied to the man about further work he said needed to be carried out, charging ever increasing prices whilst carrying out substandard work such as painting roof tiles to give the impression they had been replaced.

Smith, 50, of Rookery Gardens, Orpington, was sentenced to four-and-a-half years’ imprisonment when he appeared at Maidstone Crown Court on Tuesday 15 June 2021, having previously been found guilty of committing fraud by false representation.

The court heard how Smith, who worked under the trading name of Roof Seal and Home Improvements, did not supply an estimate, invoice or any other paperwork when first employed by the victim to clean his guttering, nor at any other point in the months that followed. After carrying out each piece of work, he would find new areas of the property that he would claim were in need of repair to ensure his services were always required and falsely told the victim he would be able to claim it all back on his insurance.

The spending eventually stopped in February 2017 when the victim attempted to withdraw a large amount of money from his bank, who raised concerns for his welfare and advised him to contact the police. He did and an investigation into Smith’s activities commenced, during which time he continued to approach the victim for work. As part of the enquiries carried out by detectives from the Kent and Essex Serious Crime Directorate, an expert witness was asked to review the repairs that had been carried out and the amounts that had been charged for it. He concluded that none of the work was necessary or justified and that if they were then it should not have cost the victim any more than a total of £3,300.

Smith was arrested at his home address on Wednesday 10th May 2017.

Investigating officer, Detective Constable Roger Harris of Kent Police, told SFM News:"‘The offences committed by Abey Smith were deplorable. He took advantage of the trust that had been placed in him by a man who was entitled to enjoy his retirement after working hard for many years  – a concept that is completely alien to a dishonest criminal such as Smith. I am pleased that the court has seen fit to impose a custodial sentence in this case, as it sends a strong message to anyone else who thinks it is acceptable to lie and cheat in order to make a living."

DC Harris went on to say: "The actions of people like Abey Smith tarnish the good name of the vast majority of tradespeople who work with honesty and integrity, and carry out repairs to a high standard. This should also serve as a warning to other householders to be cautious of who you allow to carry out work on your property. Always ensure you are provided with a quote in advance, and always get a second or third opinion if someone calls at your address claiming there is something wrong with your home that they can fix."