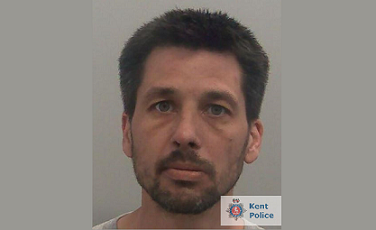 The offence took place outside a shop in St John's Avenue at around 9:00am on Tuesday 14th April and was clearly captured on a security camera with the footage showing Creasey driving to the scene in a car before speaking to the woman outside the shop. The footage showed a short conversation taking place before the offender snatched her bag and ran towards his vehicle while she was left laying on the floor, having sustained bruising to her arm and soreness to her shoulder.

Creasey then drove away from the scene but, shortly after the offence took place, the CCTV footage was uploaded to social media and within minutes Creasey's name had been reported several times to Kent Police. Patrols acted promptly and arrested Creasey later that day and he has remanded in custody ever since. Officers were also able to reunite the victim with her bag, which contained several photographs that are of sentimental value.

The investigating officer, Detective Constable Nicola Lincoln, told SFM News: "This crime was carried out during lockdown, when most people are looking out for their vulnerable friends, family members and neighbours. Creasey saw his victim outside the shop and took advantage of the situation, pulling her to the ground, injuring her and stealing her bag. Though shaken and physically hurt, she has shown great bravery in assisting us with our case and should be commended. Though this was an awful experience for her, it brought out the best in the community, who rallied round and were keen to wish her well, send cards and flowers and even donate money to the NHS as per her wishes. A true reflection of the largely good, kind people in the community as opposed to the abhorrent actions of one person".