National Highways have today (Tuesday 17th January) given an update on the M2 junction 5 improvement scheme and the eastbound slip roads. 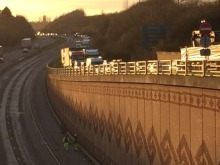