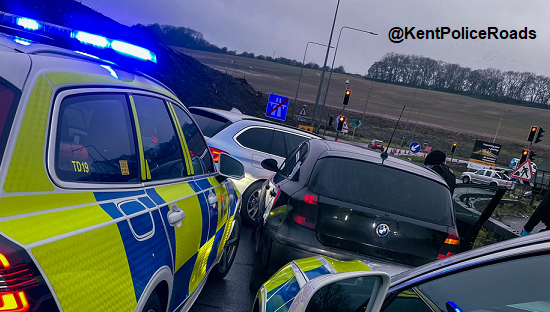 Five men in the vehicle were arrested on suspicion of affray. A sixth man located near the scene of the disturbance was detained in connection with the supply of controlled drugs.

PC Josh Davidson, of Sittingbourne CID, told SFM News: ‘We believe there were several members of the public in the area at the time of the disturbance and are appealing to any witnesses to contact our appeal line. Motorists with any dashcam or any residents who have private CCTV are also asked to check for footage that may assist our investigation."

Anyone with information should call Kent Police on 01795 419119, quoting crime reference 46/264885/21 or, alternatively, they can contact the independent charity Crimestoppers, FREE and anonymously, on 0800 555111 or by using the anonymous form on their website: https://crimestoppers-uk.org/give-information/forms/give-information-ano... .

All six arrested men were later bailed to return to the police station on Friday 21st January 2022.