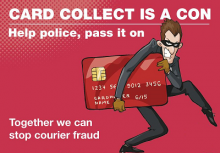 Officers investigating a courier fraud in Sittingbourne have arrested a 22-year-old man from London and a local 26-year-old-woman.

A woman in her nineties reported that she had received a call from someone claiming to be a police officer who told her that her debit card had been compromised. She alleged she was told to put her debit card in an envelope. The caller then asked if she had any valuables in the house and that these would also be safer at New Scotland Yard.