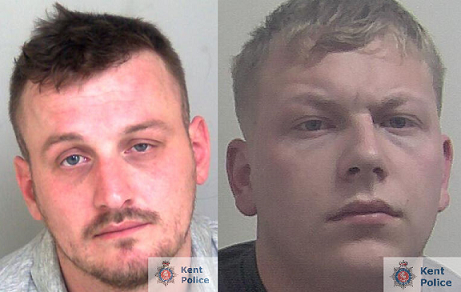 Together they stole three vans, two Land Rovers, a trailer, a climbing wall, a high pressure jet washer and attempted to steal a further trailer from locations including Sittingbourne, Maidstone, Tonbridge, Tunbridge Wells and Paddock Wood.

Separately, between Monday 3rd February and Tuesday 11th February, Adams also stole a Land Rover, a caravan, a trailer and attempted to steal two further Land Rovers and a digger on a trailer from Paddock Wood, Kemsley, Marden, Sittingbourne and Burwash in Sussex.

Mills was alone when he also stole a van from Sittingbourne on Monday 2nd December 2019.

The pair planned the thefts over their mobile phones and used cars with false number plates to travel to the scene of their crimes and in some cases brazenly tow away stolen trailers when their owners were distracted.

Following the thefts they discussed disposing of the property via text and in some cases sent photographs of the stolen items to prospective buyers.

Mills of Rectory Road, Sittingbourne was arrested on 18th February and Adams of no fixed address was detained on 20th February.

Officers seized their mobile phones and were able to recover text conversations and photographs of some of the stolen property. Investigators proved they were responsible together or separately for offences where property valued at around £100,000 had been stolen.

Both were later charged with conspiracy to commit theft. They pleaded guilty at Maidstone Crown Court and on Monday 14 September 31-year-old Mills was jailed for four years and one month and 21-year-old Adams was sentenced to three years and nine months.

Detective Chief Inspector Lopa McDermott, of the Kent Police Chief Constable’s Crime Squad, told SFM News: "These two criminals brazenly committed their crimes when the owners were distracted or drivers were making deliveries. They ran their offending as a business, discussing which items to steal and advertising the stolen property by sending photographs to potential buyers. Their arrogance was their downfall when investigators checked their mobile phones and found incriminating text conversations and the images. The impact on the victims should not be underestimated and in some cases businesses ceased trading due to the financial loss. It is only right that Mills and Adams are now in prison."