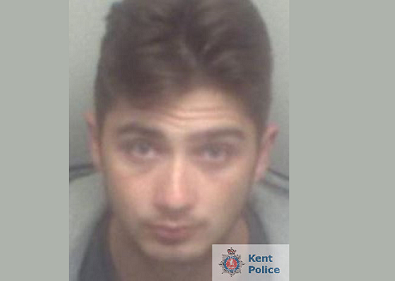 The court heard that around 7.00pm on Thursday 13th September 2018, two teenagers were socialising in the recreation ground near Park Road in Faversham. They were sitting on the grass when they noticed two men near the skate park area being rowdy and drinking from a bottle. One of the men, Scamp, approached the teenagers accusing them of laughing at his friend. Whilst he was still sitting Scamp struck one of the teenagers in the face with the back of his hand. He then kicked him in the face causing him to fall backwards and lose consciousness for a few minutes.

The police were called and witnesses were able to identify Scamp as the offender. He fled the scene and officers pursued him on foot, however, he was handed a bicycle by an unknown youth and was able to escape. Further investigation confirmed Scamp had carried out the assault and eight days later officers arrested him at his home address.

The victim had sustained a fractured cheekbone which required surgery. Scamp was found guilty of causing grievous bodily harm with intent and was sentenced to three years and six months at Maidstone Crown Court on Monday 23 September 2019.

Investigating officer, Police Constable Luke Challinger, told SFM News "The victim of this case, who was significantly younger than the offender, was socialising with his friend and Scamp viciously kicked him in the face for no reason causing serious injury. His violent behaviour during this unprovoked attack is unacceptable and a custodial sentence is entirely justified."