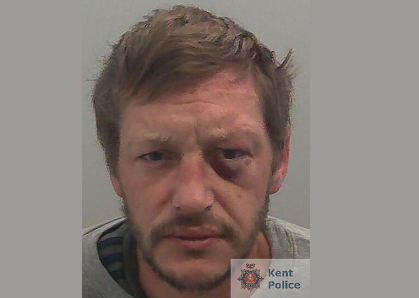 The victim followed and caught Bignall as he attempted to follow the other offender over a fence into a neighbour's garden. A struggle ensued and Bignall, who was holding a screwdriver, assaulted the victim while making threats. A number of neighbours who heard the commotion came to the victim's assistance and helped restrain the burglar until the arrival of police officers.

Bignall of Larkfield Avenue, Sittingbourne was arrested and later charged with burglary, going equipped to steal and assault. The 38-year-old pleaded guilty at Maidstone Crown Court and  was sentenced to two years and nine months in prison on (Thursday 12th March) at the same court..

Officer in the case, Detective Constable Nicola Lincoln told SFM News: "This burglar did not hesitate to use violence in an attempt to escape the scene of his crime. It is to the victim's credit that he stood his ground and bravely held onto the offender until the arrival of patrols. I would also like to commend the neighbours who came to his assistance. This prison sentence will ensure the residents of Sittingbourne are protected from Bignall's criminal activities."