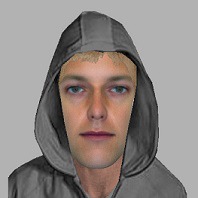 The caravan was occupied by a man and a woman who had been sleeping when the offenders initially began banging on the door. After smashing their way in the men demanded they be given access to another unit nearby. It is reported the victims were threatened with a hammer during their ordeal. One of the victims, a woman in her 40s, has since required hospital treatment after being kicked in the stomach.

The men eventually fled, stealing only a Samsung mobile phone. It is believed they drove away in a white van, possibly a Vauxhall Vivaro or a Renault Traffic. All the males are believed to have been wearing hoodies and/or baseball caps. One of the suspects is described as being white, aged in his 20s and of slight build. He was around 5ft 9ins tall and clean shaven. Another suspect was also white and of similar age. He had a larger build and was around 5ft 11ins tall.

Detective Constable Jo Kirkham told SFM News: 'Although we are treating this as an isolated incident it was a particularly horrific ordeal for the victims, which has left them frightened for their safety. I would urge anyone with any information to contact the police as soon as possible.'