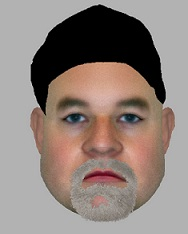 Detective Constable Stuart Tracey, the investigating officer at Kent Police, told the SFM News Team: "We have issued an E-fit image of a man we would like to speak to and are also particularly keen to speak to anyone who was in the area at the time of the incident as their information may be able to assist with our ongoing enquiries to establish the circumstances surrounding this incident.'

Witnesses to the incident, or anyone who recognises the man in the efit image, is asked to contact DC Stuart Tracey directly at Kent Police by calling 01795 419119 or they can call free (from any landline) and anonimously on 0800 555 111 and should quote crime reference: XY/000507/16.