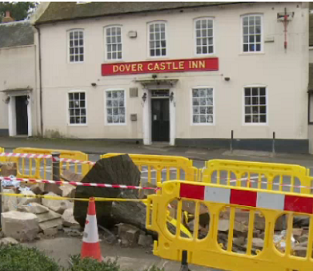 He pleaded guilty to all offences and was sentenced at Maidstone Crown Court earlier today (Friday 16th December).

The court heard that Howard and a 27-year-old woman he knew were travelling together in a blue Renault Clio when Howard stopped and offered a lift to two other acquaintances.

Michael Shepherd, 27, and Karl Buchan, 23, both from Faversham, agreed and got into the back seat of the vehicle.

A short time later Howard lost control of the Clio, causing it to collide with a parked car before mounting the pavement and knocking down the Jubilee Pump. The vehicle then travelled into the front garden of a property before hitting a small wall and flipping over onto it's roof.

Mr Shepherd and Mr Buchan were both thrown from the car and pronounced dead at the scene following the arrival of the emergency services.

Among the injuries suffered by the female passenger were a ruptured bladder, punctured lung and fractures to her neck, pelvis and tailbone. She also suffered bruising to her brain and a deep cut to her head that required 28 staples and 21 stitches.

During the investigation into the incident a specialist forensics officer concluded that Howard would have been travelling at speeds of at least 60mph on a section of road with a 30mph limit.

Investigating officer, Detective Constable Di Walker, told SFM News: "this was a tragic incident that resulted in the deaths of two young men, which will lie heavily on Ashley Howard's conscience for the rest of his life. Not only is it highly likely he was driving well over the speed limit in the moments before the collision, he should not have been behind the wheel in the first place as he has never owned a full driving licence. A motor vehicle can be very dangerous in the wrong hands, and Howard proved he did not have the experience, skill or maturity to drive in a safe and responsible manner. My thoughts remain with the families of Mr Shepherd and Mr Buchan, as well as with Howard's other victim who still suffers from her injuries to this day, and everyone else affected by this dreadful incident. I hope today's outcome is of some small comfort to them."