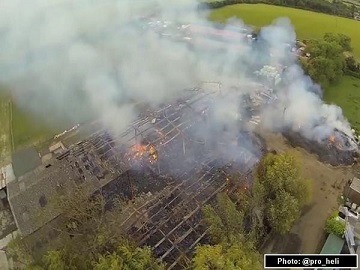 Swale District Commander, Chief Inspector Tony Henley, told SFM News: "I recognise how distressing these mindless and destructive fires are and I would like to reassure the residents of Sheppey, and in particular the farming community, that we are committed to catching those responsible. Alongside the criminal investigation my officers are speaking to the farming community and those affected and offering support and advice at this time. We have one person in custody today. However, we have a number of lines of enquiry ongoing and there are other people we would like to speak to in connection with these incidents. I would urge anybody with any information about these incidents to contact the investigating officer, PC Robin Stump, on 07980 683675​, quoting crime reference XY/029871/14. Alternatively, if you would prefer to remain anonymous you can call Kent Crimestoppers free (from any landline) and anonimously on 0800 555111."