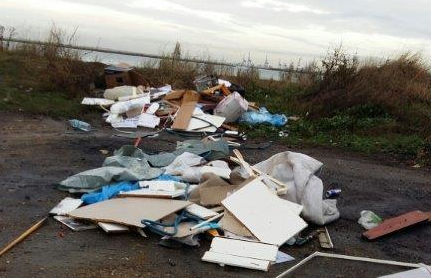 A Maidstone man is almost £2,200 out of pocket after building waste was dumped in Iwade.

Josh Allen, 26, of Wallace Avenue, Parkwood in Maidstone, was prosecuted by Swale Borough Council after building and demolition waste, including wood, shelves and carpets, was found dumped on Raspberry Hill Lane, Iwade in November 2016.

Council officers traced the waste to a fast food restaurant. The owner of the restaurant confirmed he had paid a company called Josh Clearance £150 to remove the waste, and provided contact details and text messages as evidence.

Mr Allen was interviewed by council officers and confirmed arranging the transaction. He denied holding a drivers licence, and claimed he and a friend picked up the waste in the friend's truck, and he left the vehicle and didn't know what happened to the waste after that.

Following the interview, Mr Allen was asked to produce his authority to act as a broker for waste and the waste transfer notes for this particular transaction. No response was given, and a fixed penalty notice was issued for the offences.

Despite reminders, Mr Allen failed to respond, leaving the council with no choice but to go to court.

The case was heard on Monday (19th March) at Medway Magistrates Court, where Mr Allen was found guilty of two charges relating to the transport of waste.

Cllr Nicholas Hampshire, deputy cabinet member for safer families and communities at the council, told SFM News: "Local people are sick of seeing other people's rubbish illegally dumped around the borough. We are determined to do all we can to track down those who fly-tip, and take the necessary legal action against them. If you pay someone to take away your rubbish, and it is fly-tipped, you could be prosecuted if you can't prove who took the waste away. In this case, the business owner rightly kept records which we were able to use to track down who took the waste away. I strongly urge people to check who is taking their waste, make sure they're licenced, and keep invoices and receipts so you can help us trace them if waste is dumped."

To check whether someone is licenced to carry waste you can visit the Environment Agency website or alternatively you can call 03708 506506.

For more information about fly-tipping, and what the council is doing to tackle it, visit www.swale.gov.uk/fly-tipping.