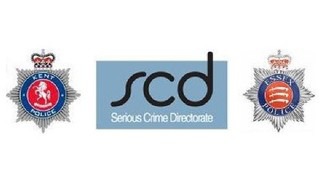 The gang used a stolen heavy-duty digger to break through the outside wall of the depot and gain access to the inside of the premises. Once the wall had been damaged the gang, who were armed with baseball bats and white sacks, climbed over the rubble only to realise they had knocked over the wrong wall. They then entered a nearby warehouse but found the building to also be empty and fled the scene with nothing. In August 2014 a 52 year-old man from Folkestone was sentenced in connection with the offence, and officers continued to hunt Delaney.

He was traced to Ireland and in early December 2015 and was extradited back to England from Ireland to face justice.

Delaney was also sentenced for his role in the theft of computer chips worth close to £2 million. The chips were part of a larger consignment that was being transported by lorry from Ireland to Holland, via the UK, in September 2012. Delaney, and a group of men that he was travelling with, travelled to Bedfont, close to Heathrow Airport and waited for several hours for the load to arrive before striking.

On Monday (7th December), having pleaded guilty, Delaney was sentenced at Maidstone Crown Court to a total of 11 years and three months in prison.

Detective Sergeant Rik Spicer, from the Kent and Essex Serious Crime Directorate, told SFM News: "Delaney took part in two offences; one was a high value theft and the other certainly had the potential. Delaney has evaded justice for almost three years but we are pleased to see him be returned to England and sentenced to a long time in prison for his part in the offences."