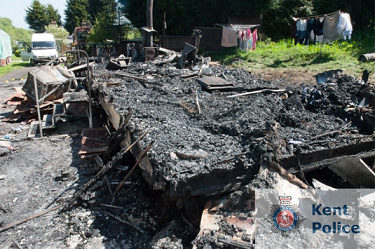 The occupants of the caravan got out and were later found by attending officers standing on a grass verge at the side of the A249. Police patrols, including armed officers, and Kent Fire and Rescue Service went into the yard where the fire was extinguished. The caravan had been completely destroyed and two vans had been damaged. Officers later recovered 13 shotgun cartridges from the scene.

William Smith had left the yard and was arrested later that day, while Eli Smith was tracked down in Sittingbourne and arrested on Tuesday 8th May. William Smith, of Miller Close, Kemsley, later pleaded guilty to affray while Eli, of Lewis Close, Faversham, admitted violent disorder. They were jailed for 19 months and 33 months respectively at Maidstone Crown Court on Friday (21st December).

William Smith's father, also called William, is due to be sentenced in the New Year after pleading guilty to arson being reckless as to whether life was endangered, and violent disorder.

Investigating officer, Detective Inspector Chris Greenstreet, of the Kent and Essex Serious Crime Directorate, told SFM News: "This was a very violent incident and it is only chance that nobody in the caravan was seriously injured. These convicted men have shown no remorse and a lengthy prison sentence is entirely appropriate".