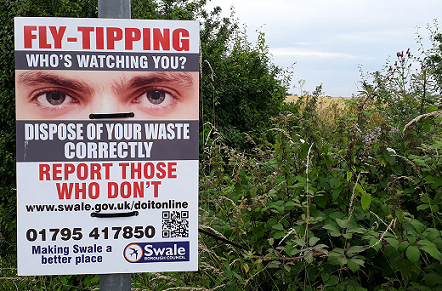 Waste Carriers were targeted on Friday (21st October) as part of a day of action to crackdown on fly tipping in Swale.

The outcomes from the day were:

Cllr Julian Saunders, chair of the environment committee at Swale Borough Council, told SFM News: “People who dump their waste in our countryside and in our streets, are thoughtless and irresponsible. We spend almost £1.3 million a year keeping our streets clean of litter and flytipped waste, and we’ll continue to clamp down on the criminals that illegally carry and dump their waste.”

Cllr Tim Valentine, vice chair of the environment committee at the council, went on to add: “We issued two fixed penalty notices (FPN) totalling £600 to a driver with a van load of end of life tyres with no paperwork, and one vehicle was seized by the Police for not having a driving license or any insurance. Thanks to this joint effort this is one load that won’t end up in our countryside. Remember, if using a waste carrier, it’s your responsibility to make sure they’re licensed. If any illegally carried or dumped waste leads back to you, you could receive a £400 FPN. Always ask to see a waste carriers license before using them.”

More and more of these action days are taking place across Kent with a large amount of preparation beforehand, including the gathering of vital intelligence to support the Council’s Enforcement team with their duties.

What can you do to dispose of your waste responsibly?

Fly tippers often target households via social media or local advertising, luring customers in with cheap rates to dispose of unwanted furniture, building rubble or garden waste. However, these unlicensed waste carriers often simply dump the waste where ever they can get away with it, including in Kent’s country lanes. Householders or small businesses found to be using criminals to dispose of their waste can and are being prosecuted by local authorities in Kent with fixed penalty notices that go up to £400 per offence. Failure to pay such an FPN may result in court action where fines can be significantly larger.

To prevent this, householders should check whether someone is licenced to carry waste by visiting the Environment Agency website below, or alternatively call 03708 506506. It also helps if householders receive a written receipt or transfer note, including contact details, description of waste removed and details of where the waste is being taken to.

The 13 Kent councils, along with Kent Police, are working in partnership to Keep Kent Clean. To keep updated with the councils’ efforts to tackle fly tipping and littering, follow #KeepKentClean.