Appeal After Suspicious Fire In Sheerness 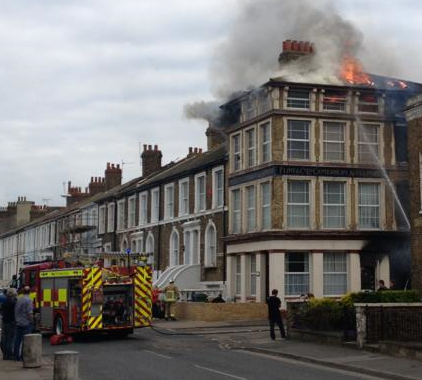 Officers from the Kent and Essex Serious Crime Directorate have launched an appeal for information following a suspicious fire which has left two people with life threatening injuries.

Police were called to the blaze at a block of flats in Richmond Street, Sheerness at 3.25pm on Monday (24th June). It had been reported that two people had jumped from the top of the storey of the building. Three other people escaped the fire and a man was rescued by firefighters using a ladder. At the back of the building members of the public saved a woman and two children with a ladder.
Three people, two men and a woman were taken by air ambulance to hospital. A man and woman have sustained life threatening injuries. The third man was treated for smoke inhalation and has been discharged.

The incident is being investigated by Detective Inspector Lee Whitehead who told SFM News "we remain in consultation with Kent Fire and Rescue Service and other specialists. At this stage we believe this fire may have been stated deliberately. I am keen to hear from anyone who may have seen anything suspicious, such as someone outside the front of the property, before the fire broke out. I would also ask anyone living nearby who has experienced a fire recently that they may not have reported to come forward. Currently we are treating this as arson and a man and a woman remain in a life-threatening condition in hospital. Their injuries are severe and I would welcome information from the public that will help us uncover exactly what has happened. Regardless of how insignificant people may feel their information would be I urge them to get in contact with police as soon as possible."

Anyone with information about this incident is asked to contact Kent Police on 101 or they can alternatively contact Kent CrimeStoppers free (from any landline) and anonimously on 0800 555111.