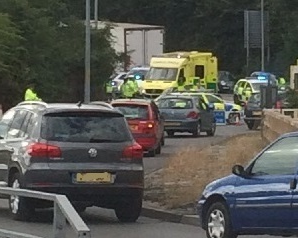 Officers from Kent Police's Serious Collision Investigation Unit attended to carry out investigations at the scene and the road was closed until 7.45pm last night.

These officers now want to hear from any witnesses, or anyone with any information who has not already spoken to them, to contact them directly at the Serious Collision Investigation Unit on 01622 798538.