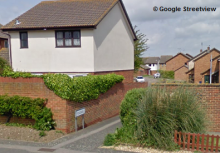 Police were called shortly after 9:00pm on Friday (6th May) after reports that a young woman, whilst attempting to walk home from Kemsley Railway Station through Foxgrove in Milton Regis, was robbed of her bag by three young males who were using a motorcycle.

Anyone with any information, that could help investigators, is asked to contact Kent Police on 101 or they can call Kent Crimestoppers free (from any landline) and anonimously on 0800 555 111 - please quote Crime Number XY/017155/16.