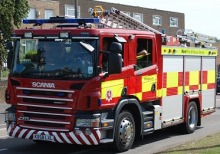 Kent Fire and Rescue Service (KFRS) were called to reports of a bedroom fire at a home in Sittingbourne earlier this afternoon (Saturday 28th May).

The KFRS were contaccted at 14:08 hrs and three fire engines attended the house in Jade Close.

The residents were alerted to the incident by their working smoke alarms and no casualties were reported.

It's believed the fire started accidentally due to an electrical fault.