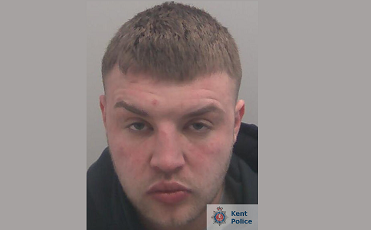 A man who repeatedly stamped on his former partner’s head during a violent assault near Rochester has been jailed.

Aaron Boon also pulled a clump of hair from his victim, during a sustained ordeal which was witnessed by two young children.

Boon, aged 29, carried out the assault on the evening of 29 November 2021, after an argument with his victim had spilled into a communal area outside a flat where she lived. After pulling her hair, he pushed the woman to the floor as she shouted for help from neighbours. He continued the assault in the presence of children stamping on her head at least six times.

Boon then left the scene after taking the victim’s watch and £20. He returned shortly after and in an effort to get back inside the flat caused damage to a front door. When police attended Boon violently shoved a female officer causing her to almost fall down a flight of stairs. He also elbowed her head. He then kicked, punched and bit a male colleague, before being successfully restrained and arrested.

At Woolwich Crown Court, Boon pleaded guilty to charges of assault occasioning actual bodily harm and two counts of assault of an emergency worker. He further admitted charges of criminal damage and possessing cannabis. The court heard Boon, previously from Kemsley, had also breached a previous suspended sentence and on Thursday 3 March 2022, he was sentenced to 21 months’ imprisonment.

PC Sophie Marshall, of the North Kent Vulnerability Investigation Team, told SFM News: "I would like to thank and commend the victim, who has shown immense courage and strength to give evidence, having also endured previous physical and mental abuse from Boon. Thankfully, she was not left with any serious long-term injuries, however Boon’s actions will no doubt leave profound psychological scars and have also caused a huge amount of distress to her children. The victim’s continued support in this case as well as her children’s bravery should be recognised and acknowledged and provide other victims of assault the courage to support a police investigation. Domestic violence is a priority for Kent Police and nobody should ever feel they have nowhere to turn. I would encourage anyone who finds themselves in a similar situation or relationship to report it to someone and get help. There is a range of support and information available, just phone us or ask a trusted friend or relative to do it. Nobody should ever feel they don’t have the option to walk away or get help."