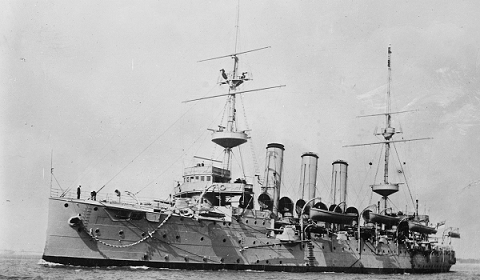 Two men have been charged in connection with the alleged removal of items from a sunken Royal Navy warship in the English Channel.

HMS Hermes was a protected cruiser built in the late 19th century and converted into an aircraft ferry and depot ship ready for the outbreak of the First World War.

It was sunk by a German submarine in the Dover Strait in October 1914 with the loss of 44 lives.

Officers from Kent Police's Rural Task Force launched an investigation in August 2015 after being informed that a number of historical artefacts had been reported missing from the wreck.

John Blight, 57, of Old River Way in Winchelsea, East Sussex, has now been charged with three counts of dishonestly failing to disclose items of wreck to the Receiver of Wreck with intent to make a gain.

Nigel Ingram, 56, of London Road, Teynham, has been charged with the same three counts in addition to being in possession of £16,000 worth of criminal property.

Both men have been bailed to appear before Margate Magistrates on Thursday 2nd March.

The investigation into the alleged offences was carried out in partnership with the Maritime and Coastguard Agency, the Marine Management Organisation, the Receiver of Wreck, Sussex Police, Historic England and the French authorities.