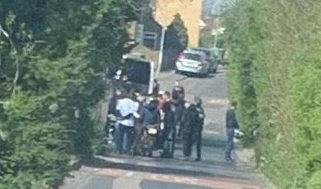 As a contingency tey say that "officers maintained a visible presence during the day and looked to strike a balance between allowing those who attended the opportunity to grieve, while protecting the wider community from any potential health concerns".

Chief Inspector Neil Loudon told SFM News: ‘Kent Police was afforded very little notice about this large gathering and as such a decision was made to allow the funeral to go ahead during what was no doubt a difficult time for those who had lost a loved one.

Our offficers' priority was to maintain a presence while offering protection to the wider community around any health concerns they may have had. Those who have been identified as attending the ceremony and not adhering to the public health advice will be contacted in due course and reminded of their personal responsibilities during these unprecedented times.'

During the gathering, which involved large numbers of motorcyclists, some disruptive and anti-social riding was reported and two men aged 24 and 32 were both arrested on suspicion of dangerous driving and driving without a licence.

A 17-year-old boy, who was a pedestrian attending the funeral, was also seriously injured when he was involved in a collision with a motorbike in Tonge Road at around 10.40am. Kent Police's Serious Collision Investigation Unit has started conducting enquiries in to the circumstances.

Ch Insp Loudon added: "Some serious incidents took place during this gathering which have had an impact not only on those who were involved, but also the wider community.

As a result, there will be an increased presence of police officers in and around Sittingbourne in the coming days and weeks whilst enquiries take place and to provide some local reassurance.

Our investigation continues and where there are clear acts of anti-social behaviour, crime, and persistent breaches of coronavirus legislation then we will seek to identify and prosecute these."