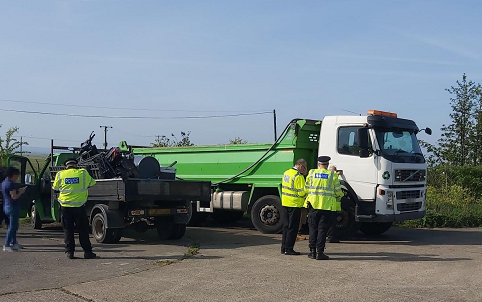 On Monday (9th May) the two teams, along with the DVSA and Environment Agency, spent the day on the A249 on the Isle of Sheppey and in Mill Way, Sittingbourne checking vehicles carrying all types of waste.

In total, 25 vehicles were inspected with waste carriers’ licenses and documentation checked.

Officers arrested two men for theft and handling stolen goods after they checked their vehicle and found a number plate linked to a stolen vehicle. The 18-year-old from Faversham and 26-year-old from Herne Bay were questioned and released on bail while enquiries continue.

A 29-year-old from Tunbridge Wells was also arrested for drug driving offences and has since been released from police custody pending further investigation.

Sergeant Darren Walshaw from the Rural Task Force told SFM News: "Operations like this are really important to ensure people are not disposing of waste illegally. We work closely with our local authority partners to tackle the issue and send a message to those intent on illegally disposing of waste that it will not be tolerated. By carrying out these operations we are also able to identify other offences as we were in this case and we will continue to do so to protect our communities from not just fly-tipping but from all criminality."