Statement From The Mayor Of Swale 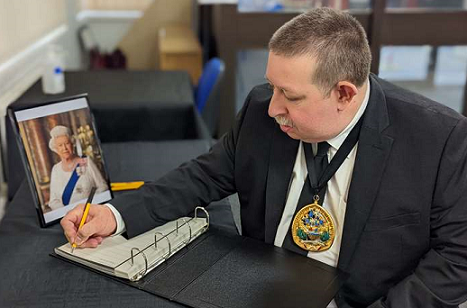 “It is with enormous sadness that we learned of the death of Queen Elizabeth II, and I would like to express our sincere condolences on behalf of Swale Borough Council and the people of the Borough of Swale to the entire Royal Family.

“The Queen was known across the world for her strong sense of duty and commitment to serving the country and the Commonwealth.

“Her Platinum Jubilee showed the respect and admiration we had for her tireless work, and as we mourn her passing we must reflect on how fortunate we have been to live through her reign.”

As a mark of respect, flags are being flown at half-mast across all council buildings.

Books of Condolence are being opened at Swale House, Faversham Town Council Offices and Sheppey Gateway to allow local people to pay their respects from 10am to 4pm weekdays and 10am to 12 midday on Saturdays.

Floral tributes will be laid at the war memorials in Sittingbourne, Sheerness and Faversham.

Also, as a mark of respect, Civic and council events and meeting have been cancelled until after the funeral.