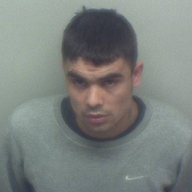 He dropped two tubs he was carrying as he was being arrested. These were found to contain cannabis and a cricket sized ball of white powder. A further search of the property revealed deal bags, scales and what appeared to be a drugs cutting tool. In total, more than 80 grams of cannabis was seized, along with 10 grams of cocaine.

Large quantities of other (uncontrolled) substances including benzocaine and creatine were also recovered, along with cash in excess of £1000. Text messages on Dawkins' mobile phone provided further evidence of his drug dealing.

Appearing at Maidstone Crown Court Dawkins pleaded guilty to counts of possessing cannabis and cocaine with intent to supply. On Monday 23rd May he was sentenced to 3 years and 7 months imprisonment.

Jessica Luckhurst, aged 26, also of Burnham Close in Sittingbourne was convicted of being concerned in the supply of cannabis and cocaine. Luckhurst was given a suspended prison sentence of 12 months.

Investigating officer Detective Constable Iain Joyce, of Kent Police, told SFM News: "Dawkins was caught red-handed carrying drugs and almost 200 grams of benzocaine and creatine, substances he clearly intended to use as cutting agents for Class A drugs. It was clear that Dawkins was set up to supply significant quantities of cocaine, which would have ended up on the streets of Sittingbourne and beyond. This is another success for our Operation Jupiter team, but once again I would remind residents that their role in helping us keep communities safe remains vital, so please continue to report any suspicious behaviour."

Operation Jupiter is part of local strategy designed to tackle emerging criminal gangs, whose members often travel into the county from other areas.

The strategy includes taking robust action to deter criminals in areas including Medway, Swale, Gravesham and Dartford, often in connection with the sale and distribution of drugs.