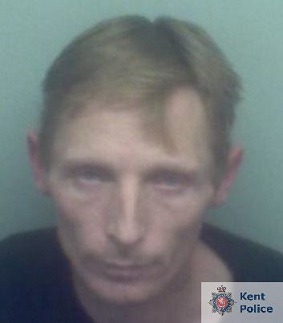 Yesterday (Tuesday 28th February) 37-year-old George Bignall, of Middletune Avenue in Sittingbourne, was sentenced to a total of two years and eight months for a distraction burglary, theft and affray.

Maidstone Crown Court heard that during the evening of Thursday 24th September 2016, Mr Bignall called at an address in Sittingbourne offering to sell toys and clothes. The woman occupant told him she had no money and so he asked for a glass of water as his mouth was dry. The householder went to get him a glass only to find him inside her house on her return. He then asked to use her bathroom, which she kindly agreed to and, having spent some time out of her sight, he returned and started to rummage through her possessions in front of her.

She asked him to leave and, when he asked for some money, the woman was so scared that she handed him twenty pounds. The victim later found that her purse had been stolen.

The following day, the victim was returning to her house with her sister when she saw Bignall outside her house again. He accused her of stealing his bracelet and when she denied this he demanded money threatening to burn down her house. During this altercation Bignall fell over a push-chair and it later transpired that a mobile phone had been stolen from it.

Police officers arrested Bignall later that day. He denied being present at the victim's address earlier but, when confronted with CCTV footage, changed his account and said he was walking past when the two women accused him of stealing things. He also denied being at the house the previous day stating he would not ask for a glass of water when he had access to an address nearby.

Bignall's fingerprints and DNA were later found on the glass used for the drinking water and he pleaded guilty at court.

Detective Constable Aaron Chapman, investigating officer for Kent Police, told SFM News: "Bignall is a devious bully who conned his way into the address of a vulnerable young woman and took advantage of her kindness to steal her property. When challenged he reverted to threats and violent behaviour and he should be thoroughly ashamed off his conduct towards this family."