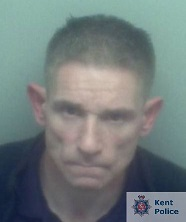 A Sittingbourne burglar has been jailed for more than two years.

At around 10.30pm on 24th October 2016, a couple in their 70s discovered their home in Portland Avenue, Sittingbourne had been burgled.

Stolen items included a wallet with cash, and several pieces of antique jewellery.

An investigation by Kent Police revealed Christopher Swanson as the burglar and he was seen on CCTV climbing through a bedroom window of the property.

Swanson, aged 50 and of Peony Crescent, was sentenced to 28 months in prison after pleading guilty to one charge of burglary at Maidstone Crown Court on Thursday (1st June).

Investigating officer PC Craig Hewitt told SFM News: "Swanson is a career criminal with previous convictions in theft and clearly shows little regard for the impact and upset his actions may have on others. He is a selfish and insensitive individual who stole items which were considered family heirlooms and irreplaceable to their victims, like engagement rings and wedding bands handed down through generations and full of memories. Being a victim of burglary can be devastating and I am pleased that Swanson will not be able to cause any more upset while he is in prison."