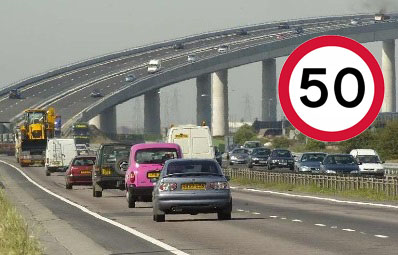 The speed limit on the Sheppey Crossing was lowered from 70mph to 50mph from 10.00am this morning (Wednesday 22nd July).

The "emergency" speed cut follows a pre-inquest review in to the deaths of Deborah Roberts and her 8-year-old son Marshall on the crossing last July.

The inquest itself has yet to take place, but the design of the bridge, visibility and braking distance are expected to be discussed as the cause of death is further investigated.

"Safety is Highways England's top priority", said a spokesperson, "We are fully supporting the inquest. The coroner in the pre-inquest hearing has recommended urgent action. In the interim, before the full inquest has taken place, Highways England has taken the decision to introduce a temporary speed limit on the basis that we need to assess whether such a measure would improve safety."

The speed limit is in place in both directions on the A249 between the junction with the B2005 (Grovehurst/Iwade) and the Neats Court roundabout.

MP for Sittingbourne and Sheppey, Gordon Henderson, has tentatively shown his support for the reform telling SFM News "I am delighted they're doing something, but I want to speak to the Transport Minister to see what other measures might be considered as well".

However, others are sceptical the change in speed limit will improve safety on the crossing. Deborah Roberts's sister, Emma Tweed, feels the speed limit will only be effective if it is enforced. "There needs to be average speed cameras because otherwise drivers won't stick to it when they don't stick to the 70mph limit now."

In September 2013, a 130-vehicle pile-up injured 60 people on the crossing and became one of the largest crashes in British history. It was ruled that foggy weather and speed were to blame.