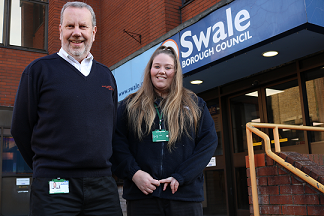 Cllr Roger Truelove, leader of Swale Borough Council, told SFM News: "We’re delighted to be recognised for all the hard work we do in caring for stray dogs and the welfare of animals during an emergency. This is the fourth year in a row we’ve received the Gold Pawprints Award for contingency planning, which is well deserved for our resilience team who’ve been working hard to make sure we have procedures and processes in place to ensure the welfare of animals during an emergency.”

Cllr Tim Valentine, cabinet member for environment at Swale Borough Council, told SFM News: “The Gold Pawprints Award recognises us for going above and beyond to ensure the high welfare standards for the animals across the borough. Our stray dog team really does put their heart and soul into caring for the stray animals they find, as well as actively promoting the schemes and services we offer such as micro-chipping. We’ve received this award for 11 years in a row and we will continue to work hard to keep up the high level of service we’ve been recognised for.”

To find out more about how you can prepare to look after your animals during an emergency visit www.swale.gov.uk/emergency-pet-welfare.

To report a stray dog during normal office hours, the public should call 01795 417850 where arrangements will be made for the dog to be collected.

If a dog is found between 5pm and 9pm on weekday evenings, and between 9am and 9pm at weekends and on bank holidays, the public should ring the found stray dog line on 07795 237479.