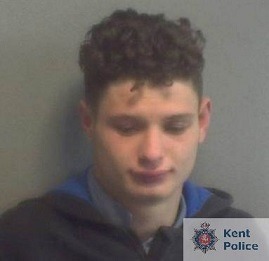 One of the men was named locally as Reece Thomas. Enquiries revealed the 21-year-old, of St Nicholas Road in Faversham, had posted a photo on social media of himself wearing the cap with the caption ‘Free pizza for me tonight.'

A week later police officers were on patrol in Faversham when they saw Thomas and stopped to speak to him. Thomas swore at them before running away. As the officers gave chase on foot, Thomas pulled a knife with a seven inch blade from his trousers before running and barricading himself into a brick outhouse. After 45 minutes, officers talked Thomas into handing himself in, and he was arrested and charged with robbery, affray, and possession of a knife in a public place.

At Canterbury Crown Court on 18th April Thomas pleaded guilty to all three charges and was sentenced to a total of 40 months in youth offenders institute. He was also ordered to pay a £170 victim surcharge.

Investigating officer, Detective Constable Mark Silk, told SFM News: "While the items taken may not have been high-value, this was nevertheless a nasty, unprovoked attack on a victim who understandably was left shaken by the whole ordeal. Behaviour like Thomas' is never acceptable and I hope he takes the opportunity in custody to think about the effect his actions can have on others."