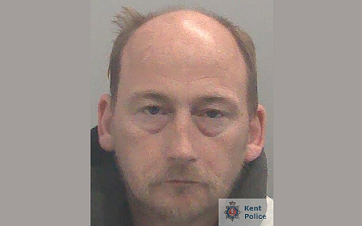 The victim pursued him and partially shut the door preventing his escape. Bygrave managed to pass some of the cash to Brazil and, in the struggle, cut himself. Brazil left the scene with some of the money and was chased into an alleyway by the victim’s husband. Brazil assaulted his pursuer but was detained by attending officers.

Bygrave had run from the shop before the arrival of patrols and investigators recovered CCTV that showed both men at the scene. Bygrave was arrested on Wednesday 25th May and forensic examination of blood on the door and a newspaper inside the shop, recovered his DNA.

Both men pleaded guilty at Maidstone Crown Court and on Monday (5th September), 42-year-old Bygrave was jailed for two years and eight months.

Brazil, aged 30, was previously sentenced on Thursday 26th May to a 12-month community order and will have to complete 150 hours of unpaid work.

Kent Police’s officer in the case, PC Nathan Green, told SFM News: "Bygrave is a violent man who forcibly stole a woman’s cash thinking his victim would not resist. He underestimated her and in the ensuing struggle left traces of blood at the scene. Investigators were quick to identify him as responsible for the crime and he is now serving a well-deserved prison sentence. I would like to commend the victim, her husband and other witnesses who have assisted us to bring Bygrave and his accomplice to justice".