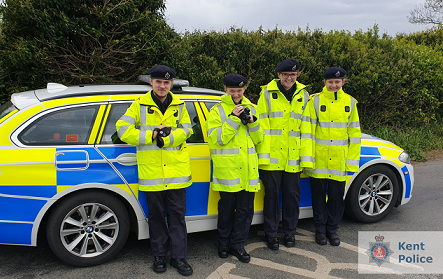 Each used speed guns to record a vehicle's speed and provided words of advice to drivers who had been stopped due to their speeding.

The roads checked were Woodstock Road in Sittingbourne, Chestnut Street in Danaway and both Scocles Road and Minster Roads, in Minster-On-Sea.

The highest speed registered was 43mph in a 30mph zone.

Police Constable Mat Booth, who accompanied the cadets for the speed checks, told SFM News: "The cadets did a fantastic job and learned a lot about road safety, and interacting with the public, in the process. Their efforts led to numerous motorists being challenged for their manner of driving. Throughout the course of the year we will continue to get the cadets involved in community initiatives to help develop their knowledge of policing.'

The Kent Volunteer Police Cadets scheme opened in September 2016 and is a uniformed organisation supported by Kent Police for young people aged 13 to 17-years-old.

Cadets meet once a week for two to three hours during term time and in addition volunteer three hours each month to help with a community based project.