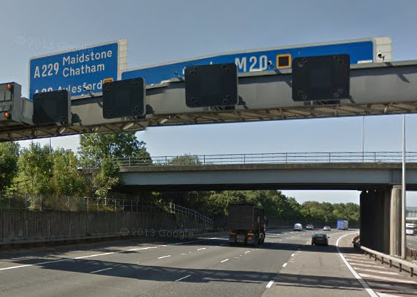 Following the collision, the driver of the car - a 19-year-old man - exited his vehicle and collided with another car, causing him to suffer a serious leg injury. The driver of the lorry - a 44-year-old man from Poland - then suffered a suspected medical episode and died at the scene.

The carriageway was closed during most of this morning's rush hour whilst investigators from the Serious Collision Investigation Team carried out enquiries, but has since re-opened.

The investigating officer, Detective Sergeant Scott Lynch, told SFM News: ‘We would like to hear from anyone who witnessed this incident who has not already spoken to police. We would also particularly like to hear from the driver of the dark-coloured vehicle that collided with the man. Their vehicle is likely to have suffered significant front-end damage. Anyone with information is asked to call the serious collision investigation unit on 01622 798538. quoting reference 18-0075. Alternatively they can email us: sciu.td@kent.pnn.police.uk."