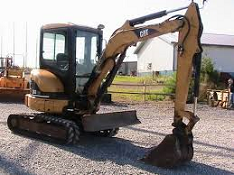 Members of an organised local crime gang, who stole diggers and trailers worth a total of more than £185,000, have been jailed.

Matthew Butler, 36, of South Street Road, in Stockbury; Nigel Black, 52, of Warden Road in Eastchurch and Ashley Austin, 24, of Essex Road in Maidstone, were all involved in the thefts from a storage compound in Bircholt Road, Maidstone, in December 2012.

Butler pleaded not guilty to conspiracy to steal but was convicted following a trial last month. He was jailed for four years when he appeared at Maidstone Crown Court for sentencing on Friday (7th November).

Black pleaded guilty to theft and was jailed for three years, while Austin admitted the same charge and received a custodial sentence of two years and seven months.

A fourth man - Grant Hodgson, 34, of Warden Road in Eastchurch - has also pleaded guilty to theft and will be sentenced later this month.

The court heard how 12 Cat mini-diggers worth about £14,000 each and 12 trailers worth £1,600 each were discovered stolen by staff who arrived at the storage compound on Monday 10th December 2012. The chains locking the front gates had also been cut and four vehicle registration plates stolen. In the early hours of Wednesday 12 December, electronic trackers installed on the machines led Kent Police to a lorry in Lodge Road, Staplehurst, which contained the diggers.

Black, who was standing next to the vehicle, and Austin, who was lying beneath it, were both arrested at the scene. Hodgson was also present but attempted to run away from officers before jumping off a 10ft-high wall - breaking his back as a result. Despite his injuries Hodgson attempted to escape on a train from Staplehurst railway station but was arrested on board and taken to hospital.

The lorry, on which the diggers were found, was traced back to Butler - a known associate of the three co-defendants - who had purchased the vehicle a month before from a dealership in Suffolk but had registered it in somebody else's name.

Investigating Officer, Detective Constable Becky Saunders, told SFM News: "This was a complex case that took two years to piece together so I am very pleased that those responsible are now behind bars. These four men are repeat offenders specialising in vehicle crime so it will come as a relief to law-abiding members of the public that they are now off our streets."