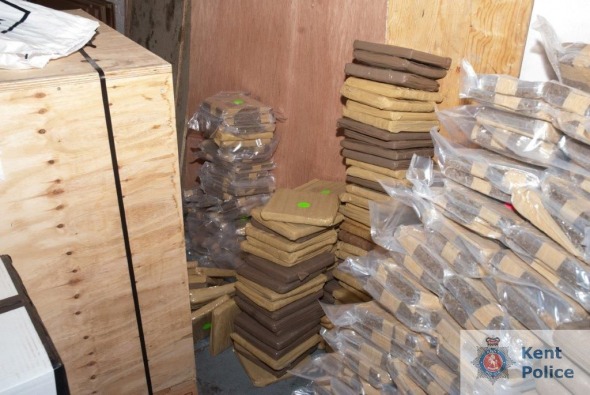 Two members of an organised drugs group have been jailed following the discovery of £7.7 million worth of cannabis here in Sittingbourne.

Kent Police officers discovered just over a tonne of the class B substance when they executed a search warrant at an industrial unit on Castle Road, at about 9.20am on Friday 23rd September last year (2016).

Thomas Cullen, 57, of St John's Road in Huyton, Liverpool, and Joseph Graham, 48, of no fixed address but with links to the Merseyside area, were also inside the property and arrested as a result.

Both pleaded guilty to conspiring to supply cannabis and class C Zopiclone tablets when they appeared at Maidstone Crown Court on Wednesday 21st December 2016.

Cullen was jailed for eight years and Graham for six years when they returned for sentencing earlier today (Friday 20th January).

The court heard how after gaining access to the premises, officers discovered 10 wooden crates of which three were open and empty. To the sides of these were multiple vacuum-packed containers with herbal cannabis inside in addition to a number of block-sized packages that had been tightly bound with brown tape.

It was later established there was a total of 1.02 tonnes of cannabis stored inside the unit, with a potential street value of up to £7.7 million.

More than 4,000 boxes of Zopiclone tablets were also seized from the premises, which had a potential street value of up to £396,000.

Investigating officer Detective Constable Mark Froome, of the Kent and Essex Serious Crime Directorate, told SFM News: "Thomas Cullen and Joseph Graham are members of an organised crime group and played an important role in what was clearly a very large drugs operation. We work relentlessly to dismantle such groups and to ensure illegal substances are kept off the streets of Kent and away from those members of the public who are most at risk. The lengthy sentences imposed on these two men demonstrates how seriously we and the courts take the issue of organised crime, and I hope it highlights to others that if you commit offences then your actions will catch up with you in the end.'

• A 38-year-old man from Sittingbourne has also been arrested in connection with the case and is currently on bail until Thursday 16th March.