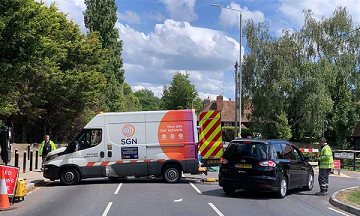 Kent Police have had to closed the A2 at Newington due to a 'major' gas leak.

The road closure comes just a day after residents received a letter saying that months of roadworks along that stretch of road were finally finished and that the area would be 'getting back to normal'.

London Road is currently CLOSED between Playstool Road and Bull Lane, causing lengthy tailbacks on to Keycol Hill (coming from Sittingbourne) and back to Hartlip (coming from the Medway towns).

Cllr Richard Palmer, who represents Harlip, Newington and Upchurch on Swale Borough Council, told SFM News: "This is really frustrating and causing chaos around the village in the country lanes. SGN Engineers had been working on this stretch of road with a contraflow for weeks and were hoping to complete on Sunday 21st June, ten weeks ahead of schedule. It is obviously an emergency and unplanned as police are manning the barriers."

SGN engineers, wearing masks, are still on the scene. The recent works were supposed to be the final part of the massive £1.8 million scheme to renew nearly 3 miles of aging gas main pipes, with contractors  even working throughout the recent coronavirus lockdown to keep the project on time.