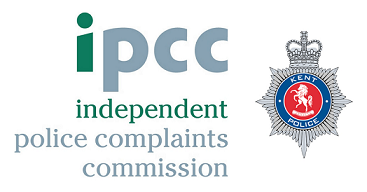 He caused life changing injuries to another driver after dangerously driving a gold Volvo estate car which collided with a black Citroen Berlingo van at around 2.30pm.

Coyle was being followed by an unmarked police car after officers became suspicious of the vehicle. Prior to the collision officers confirmed that he had been weaving in and out of traffic and driving at speeds of around 90mph. He then exited the M2 towards the Moto service station and started to speed up before he collided with the black van which caused the vehicle to spin and the driver to be ejected.

Coyle’s car then collided with a raised kerb which caused a wheel to be ripped off and the car to set alight before its momentum took it into another vehicle, which sustained minor damage. When the estate came to a stop, he fled the scene on foot and was pursued by one of the officers who had been in the unmarked police car and was promptly arrested. The driver of the van was taken to a London hospital via air ambulance and suffered life changing injuries as a result of the collision. A passenger inside the van was taken to a local hospital as a precaution following the incident.

A 19-year-old woman, who was a passenger inside Coyle’s car, was also arrested at the scene, but later released without charge.

Following the incident Coyle was released pending further investigation and was recalled to prison having breached his probation. He was later released on licence and charged with the driving offences via postal charge. A warrant was issued for his arrest after he failed to appear at court and he was placed on Kent Police’s Most Wanted list and was later apprehended.

As part of sentencing he was also disqualified from driving for more than six years which will come into effect upon his release from prison. He was also further sentenced to eight months in jail for an unconnected assault.

Kent Police referred the matter to the Independent Office for Police Conduct due to the proximity of the unmarked police vehicle prior to the collision. An investigation found no fault on behalf of the officers who had been pursuing Coyle.

Investigating officer PC Dawn Smith, of Kent Police’s Serious Collision Investigation Unit, told SFM News: ‘Coyle’s reckless and dangerous driving endangered himself and other road users and resulted in an innocent member of the public receiving serious life changing injuries which he has to face every day. He attempted to evade officers prior to the collision and immediately after and continued to do so even after he was charged. I’m pleased he has been sentenced and I hope this can offer a little comfort to those affected by his actions on this day.’