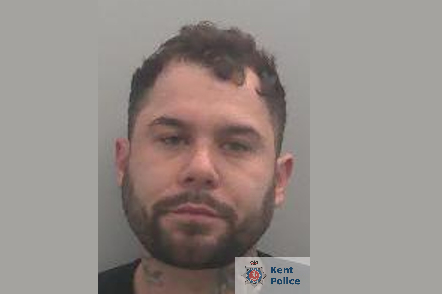 A motorist from Sheerness, who fled from police in a stolen car at speeds exceeding 100 mph, has been jailed.

Harrison Bennett, of Marina Drive in Minster-on-Sea, hurled glass bottles from an Audi and drove on the wrong side of the road during a police pursuit last year. Officers were forced to abandon the pursuit due to safety fears but then located Bennett at a property nearby where he tried to get rid of evidence by flushing the car key down a toilet. The 29-year-old pleaded guilty to dangerous driving, handling stolen goods and driving without a licence or insurance at Maidstone Crown Court.

At around 7pm on Friday 13th December 2019 patrols spotted Bennett driving an Audi with cloned number plates in Sheerness High Street. Attempts were made to stop the car but Bennett increased his speed, driving at over 100mph in a 40mph speed limit, throwing glass bottles from the car and driving towards oncoming traffic on the wrong side of the road. Due to the poor driving and risk to the public, officers decided to stop pursuing the vehicle and instead carried out a search of the area. The car was found parked outside an address in Berridge Road. Bennett was discovered inside the property and the key to the Audi was found and recovered from a toilet within the house. He was arrested and charged the next day. Bennett was sentenced to 18 months' imprisonment and banned from driving for 30 months at Maidstone Crown Court earlier today (Thursday 5th March).

Officer in charge of the case, Detective Constable Kara Sweetland from North Kent CID, told SFM News: "Bennett drove so dangerously that evening that it was lucky no one was injured. He behaved with complete disregard for the safety of himself, the passenger in his car, officers and other drivers. Even though we had to abort the pursuit, prompt action by our officers meant we were still able to track and locate Audi and bring Bennett to justice. Thankfully this result means he has now been taken off the roads of Swale and is unable to pose a threat to other drivers or members of the public."