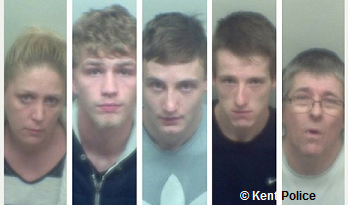 Five people from two families have been jailed after pleading guilty to producing and supplying drugs.

Brothers Rhys and Kyle Seager and their father, Antony Seager, all of Peregrine Drive in Sittingbourne, were all jailed earlier this month at Maidstone Crown Court Following an investigation by Kent Police's Operation Jupiter team.

Rhys Seager, aged 22, was jailed for 40 months after being charged for conspiracy to supply and produce cannabis, possession of MDMA and possession with intent to supply cocaine. He was also sentenced on the same day for an aggravated burglary and received eight years and four months in jail.

Kyle Seager, aged 20, will serve 10 months at a young offender's institution after being charged with conspiracy to supply and produce cannabis and possession of MDMA.

Antony Seager, aged 49, was jailed for 16 months after being charged with conspiracy to supply and produce cannabis.

Susanna Rye, aged 41, of Mountview in Borden, was jailed for 16 months after being charged with conspiracy to produce and supply cannabis as well as possession of cocaine and amphetamine.

Her son, Jason Taylor, aged 21 and also of Mountview, Borden, was jailed for eight months having denied the charge of conspiracy to supply cannabis.

The charges were bought following two drugs warrants which were executed at both addresses on Tuesday 12th May 2015. At the address in Mountview, Borden, officers found £8,310 worth of cannabis, £126 worth of cocaine as well as 18 cannabis plants with a potential income of between £25,920 and £34,560 per year.

Around £163 of MDMA, £700 of cocaine and £192 of cannabis was found at the property in Peregrine Drive, Sittingbourne. Officers also found two black bags containing cannabis leaves as well as 20 cannabis plants and it was estimated that between £28,800 and £38,400 could be made from the cannabis crop.

Investigating officer, Detective Constable Iain Joyce, told SFM News: "This group was running an organised operation of producing and supplying drugs and I'm pleased we have been able to bring them to justice and to stop them from selling drugs in and around Kent. Jason Taylor's conspiracy conviction shows that offenders can be targeted and convicted of drug offences even though they may not be found in possession of controlled drugs and that such people can and do, form lines of enquiry for the police."

Operation Jupiter is part of a local strategy designed to tackle emerging criminal gangs, whose members often travel into the county from other areas. The strategy includes taking robust action to deter criminals in areas including Medway, Swale, Gravesham and Dartford, often in connection with the sale and distribution of drugs.