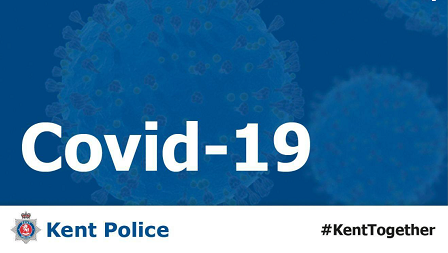 On Sunday (10th January) a man was fined £200 for being out, on his way to friends and in breach of the restrictions with no valid reason in Sittingbourne.

Kent Police Assistant Chief Constable, Claire Nix, told SFM News: "The vast majority of Kent residents continue to do the right thing and are following the rules, helping to protect the NHS and ultimately save lives. Unfortunately, there are still some people who think it is acceptable to throw parties, gather outside in large numbers or commit other serious breaches of Covid-19 regulations. Holidays within the UK and abroad are also prohibited unless for permitted reasons and, despite this advice, 7 people attempted to cross the Channel at the weekend without valid reasons and were fined as a result.

"The Government has been very clear that the best way to protect everyone is to stay at home as part of this third national lockdown and no one should be attempting holidays or breaching other rules, not just for their own protection but to prevent the spread of the virus. I am urging all Kent residents to visit the government website and know what is acceptable at this time. Anyone who is permitted to travel abroad should also obtain a negative Covid-19 test prior to departure. Anyone who turns up at the ports without one will also be turned away.

"It is also unacceptable that officers around the county are still finding some individuals organising or attending house parties with no regard for the seriousness of this pandemic.

"In these situations we will have no choice but to take enforcement action. People doing this are not only putting their own lives at risk but that of anyone they meet, some of whom will be extremely vulnerable. Anyone who flagrantly or repeatedly breaks the rules at a time when there is so much pressure on Kent’s health services should be left in no doubt that action will be taken against them."