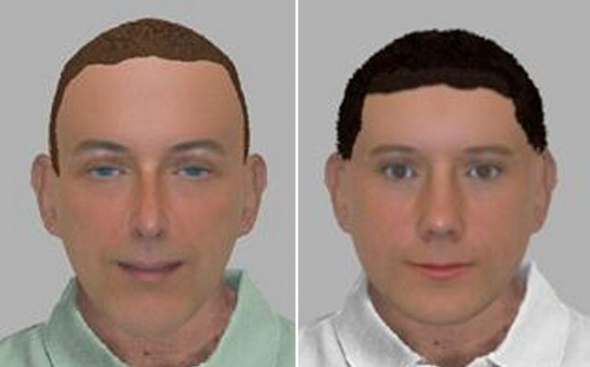 The first was reported to have happened between 3.30pm and 4.10pm when two men tricked their way into a property in Callaways Lane, Newington. The men claimed they were doing a survey in the area about blocked drains due to oil being poured down sinks. After being allowed entry to the property, they asked the property owner, a 76-year-old man, to mix some water and bleach in a saucepan to help clear the drains. After a short while both men left the property. When the pensioner went upstairs he realised his wallet with about £120 cash was missing.

The two offenders then struck again, both at properties quite close together in Sittingbourne. Between 4pm and 4.55pm two men knocked at a property in Kenilworth Court and were allowed entry after claiming they were fitting a kitchen nearby and the drain was blocked. They asked if the home owner, an 80-year-old man, would run his tap for five minutes to check. The two men left soon after and when the victim went upstairs he noticed some cabinets and a jewellery box had been moved. He then checked his wallet and realised £30 cash was missing.

At a similar time, between 4.40pm and 4.50pm, the two burglars used a similar excuse to trick their way into a house in Homewood Avenue. The occupant, an 87-year-old woman, was told the two men were fitting a kitchen but were experiencing problems because some fat had been poured down a drain. They offered to check the elderly woman's drains and one man went out in the garden to check, while the other remained in the house. The woman's chiropodist then arrived at the house and the two men left through the back garden. It has since been reported that a large amount of cash in £20 notes is missing.

The main offender has been described as a white man, aged between 35 and 45, between 5ft 6ins and 5ft 8ins tall, of medium build with short black hair and he spoke with a Yorkshire accent. He was wearing a white shirt with stripes and dark trousers and shoes.

Investigating officer, Detective Constable Sasha Monck of Kent Police, told SFM News that "these two men have tricked their way into the homes of elderly and vulnerable people with the intent to deceive them and steal money. This time of crime is not common in these areas, but they can cause a great deal of distress to the victims. If you have any information, I would urge you to get in touch with us. We would always advise anyone to close the door if they have any doubts, or tell callers to return at another time when there is someone else there".