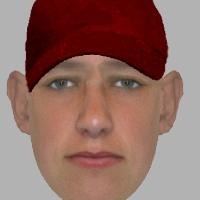 The robbery is alleged to have taken place near the Iron Mountain building on Mill Way between 1.15am and 1.25am on Saturday 1st June. The victim, a 27-year-old local man, was walking home from Sittingbourne railway station when the suspect came up to him and demanded his money. When the victim tried to hand over the cash he had on him, the man swore at him, demanded his phone and pushed him to the ground, causing the victim to sustain grazes to his elbow and a cut to his lip. When the victim got back to his feet, the suspect again demanded his phone, threatening him with a knife. The victim handed over his phone and the offender ran away in the direction of a petrol station.

The suspect is described as a white male in his early 20s, of medium build and around 5'10" in height. He is thought to be left handed and was clean-shaven, wearing a plain red baseball cap, black jeans and a black puffa jacket.

Kent Police has now released an image of a man officers believe may have information that would help them with their enquiries.

Investigating officer, Detective Constable Phil Pead, told SFM News "this was a particularly nasty incident that left the victim feeling extremely shaken up and in real fear for his safety. We will relentlessly pursue anyone who commits offences involving knives. We are working to identify and locate this male and bring him to justice".

Anybody who recognises the man in the e-fit, or who has information regarding the incident, is asked to call Kent Police on 101, quoting XY/16591/13, or they can contact Kent Crimestoppers free (from any landline) and anonymously on 0800 555111.