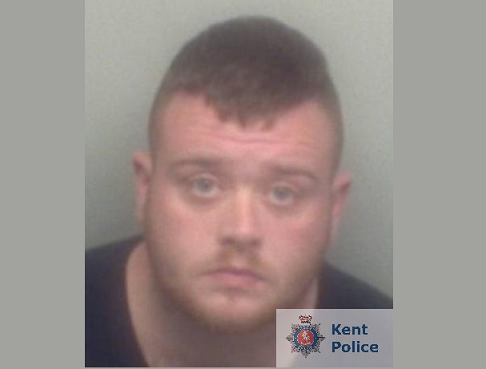 A distinctive tattoo on a burglar's hand has led to him being jailed for seven and a half years after he admitted threatening a woman with a knife in Sheerness.

Charlie Gannon, 21, of Valley Side, Chingford, was jailed on Friday (15th February) at Maidstone Crown Court after he admitted one count of aggravated burglary.

The judge heard how Gannon, along with three other men, targeted a house in Sheerness High Street at around 1.00pm on Sunday 7th October 2018.

The victim was in the living room of the house with her young child when the men knocked on the door. She opened the door and the group asked to speak to a man inside the house.

The victim then shut the door to check if the man was available, however when she returned to the front door Gannon stated they were there to rob them and shouted to the victim to go upstairs and hand over valuable items.

As he was saying this Gannon and another man forced their way into the house with the victim then hearing one of the men shouting about using a knife.

Following the incident officers then carried out an investigation identifying the people involved.

CCTV from the property revealed one of the men had a distinctive tattoo on his left hand. Officers then cross referenced this from a social media profile on Facebook and Gannon was identified. Forensic results also confirmed two fingerprints found on the front door belonged to Gannon. The other three people involved have not yet been identified.

Gannon was arrested on Monday 8th October 2018 and subsequently charged.

Investigating officer PC Mike Wills told SFM News: "This was a frightening incident in which four men attempted to enter a home where a child was present, in order to commit a robbery. Not only was force used to gain entry but the presence of a knife also increased the fear felt by the victim and I would like to commend her bravery in attempting to and ultimately pushing Gannon and the others out of the property. Gannon has received a lengthy sentence which reflects the level of violence used in this incident."