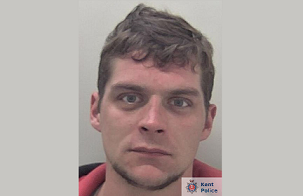 A drug dealer who supplied class A substances in Chatham has been jailed for three years and nine months.

Christopher Tregunno supplied heroin and crack cocaine on behalf of a county line named ‘Trigger’ and was twice arrested by Kent Police officers in 2020.

The 30-year-old, of Tonge Road in Sittingbourne, admitted four drug supply offences and was sentenced at Maidstone Crown Court on Tuesday (9th March).

Tregunno first came to Kent Police’s attention on Monday 16th March 2020, when officers, on a routine patrol of Manor Road, observed him selling drugs to a known user.

The constables approached Tregunno and requested he open his clenched fist. He refused to do so and instead moved his hand behind his back, dropping two plastic cases in the process.

He then opened his hand to reveal two wraps of a class A substance, with the plastic cases later found to contain further wraps of heroin and crack cocaine.

Due to the need to carry out additional enquiries, including a forensic analysis of the substances seized, Tregunno was initially released under investigation. Despite being under investigation, he continued to offend and was arrested for a second time on Wednesday 16th September 2020, after officers carried out a warrant at his home.

A mobile phone was seized and the handset’s data revealed it was being used to coordinate the supply of drugs for a county line called ‘Trigger,’ which was active between July and September. Numerous communications which discussed drug supply were sent during this time period.

Tregunno was charged with possessing heroin and crack cocaine with intent to supply and being concerned in the supply of both drugs.  He has been held on remand since the arrest.

Detective Constable Stuart Clayton, from Kent Police’s County Line and Gang Team, told SFM News: "Tregunno first came to our attention thanks to the vigilance of our patrols, who are continually attending areas known for drug supply, gathering intelligence and acting upon it. His determination to make money from supplying illicit substances is shown by his willingness to continue supplying drugs despite knowing he was already under investigation. I am pleased that a custodial sentence has now been imposed."